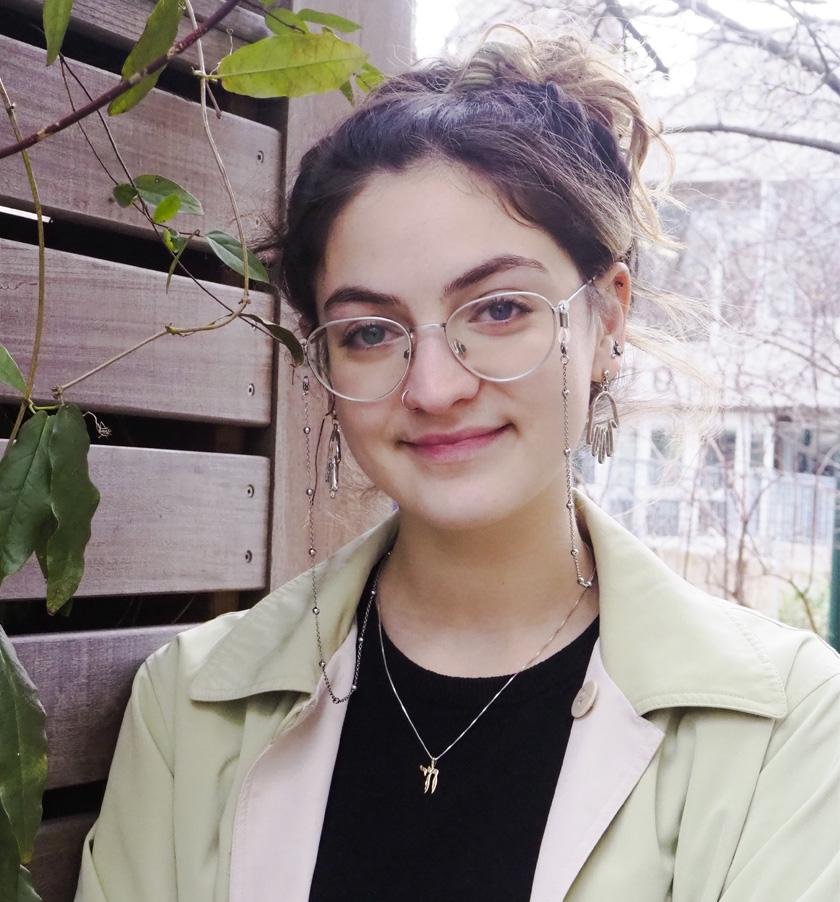 The ability to do both parts, as a student and a teacher's assistant, opened up this whole new perspective to learning and teaching that I found really impactful.

Sophia attended an arts-focused high school in Kissimmee, Florida where she majored in creative writing. At Penn, Sophia continues to study and practice creative writing as an English major with a Creative Writing concentration. Sophia counts Al Filreis, Kelly Family Professor of English and the Faculty Director of the Kelly Writers House, as one of her mentors. His class, Representations of the Holocaust, was one of the most impactful English classes she has taken so far. In this discussion-based seminar held in the Kelly Writers House Arts Cafe, students use texts and film, including The Story of a Life by Aharon Appelfeld and the documentary Shoah by Claude Lanzmann, to grapple with this difficult topic. Professor Filreis engages the students in discussions, which are often heavy but also inspiring and important. After experiencing the class as a learner, Sophia stepped up as a teaching assistant (TA) her junior year. From assisting with grading and discussions to holding office hours, Sophia made sure she was available to help her students.

Sophia loves poetry. In high school, she devoted one Saturday a month to an all-day poetry seminar. Toward the end of her senior year, she began writing her own poetry chapbook, Losing Teeth. Sophia finished editing her book at Penn and recently published Losing Teeth in Florida. While Sophia is particularly interested in contemporary poetry, she takes a range of poetry classes at Penn, including Professor Chris Chan’s course, British Poetry from 1616-1980. Sophia admires Professor Chan’s passion for 17th century British poetry and, by the end of the semester, felt a stronger connection to poems from this time and place. Sophia’s classes also inspire her to experiment and grow as a writer. In Professor Simone White’s course 20th Century Women in Poetry, Sophia analyzed The Poethical Wager by Joan Retallack and, using Retallack as a model, incorporated dialogue between two versions of herself in her final paper.

Sophia first heard about the Kelly Writers House during a pre-college creative writing summer program and was eager to learn more. Now at Penn, Sophia feels most at home in the Writers House where she spends at least 20 hours a week working, learning, attending classes and events, and meeting her peers and professors. Sophia has a work-study position as a Program Assistant for the Writers House and is part of a team that helps prepare for and execute events. Sophia photographs many of these events, including a recent discussion with journalist and Penn alum Andrea Mitchell. In this way, Sophia is able to meet her favorite literary figures including poet Bernadette Mayer who came to the Writers House for a reading.

Sophia is a writer and editor for several Penn publications. Since her first year, she has worked on the Penn Review, a literary magazine that publishes a range of genres -- poetry, nonfiction, short stories, photography, and more. Sophia enjoys the warm and welcoming atmosphere at the Penn Review and, with her recent appointment as Editor in Chief, she now helps oversee the publication. Sophia is also a columnist for Penn’s student-run newspaper The Daily Pennsylvanian. Writing a weekly column, Sophia directs attention to important issues on campus and beyond, including her recent articles on women’s reproductive health and access. Sophia also enjoys teaching writing. Along with a fellow Penn student, Sophia spent the summer after her first year introducing kids in sleep away camp to creative writing. Her students’ excitement and eagerness to write made the experience unforgettable.

Explore interests to see more you can do at Penn
Explore Interests to see where yours could go at Penn.
Show me more about
Arts and Culture Creative and Performing Arts Humanities Innovation Leadership
See All Interests