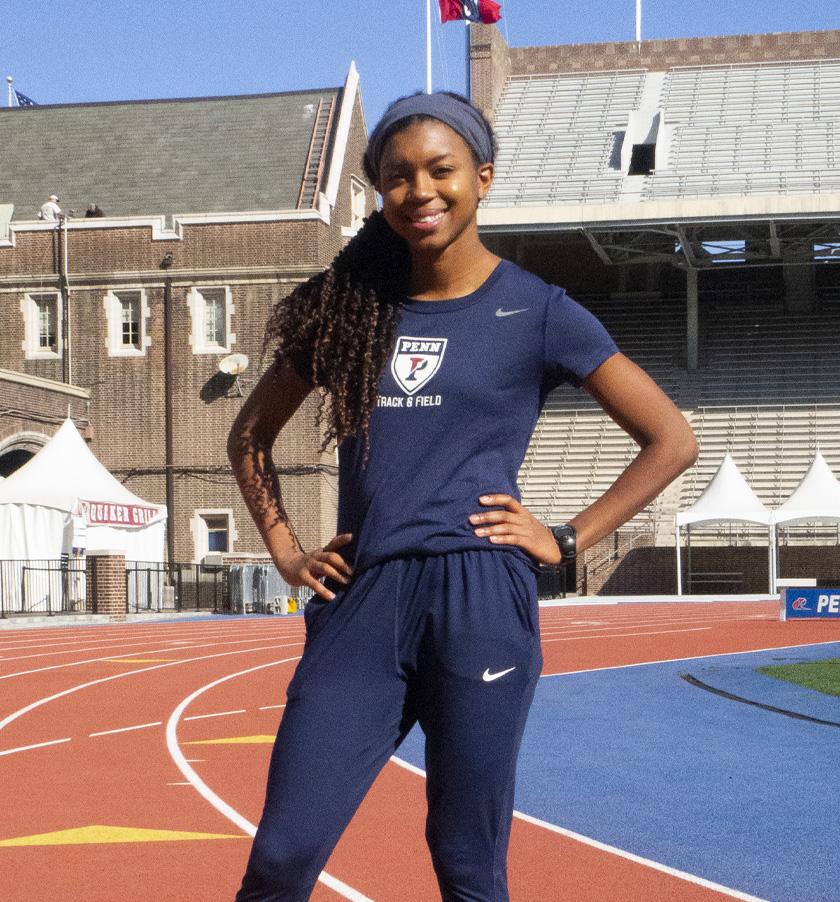 I knew I wanted to do nursing and track. I've been able to make it through the nursing program, as a nutrition major, while also contributing to the track and field team. I hope that I'm also empowering other people to do that.

Nia’s clinical rotations at the Hospital of the University of Pennsylvania, Penn Presbyterian Medical Center, and community centers in Philadelphia have been rewarding experiences for her. Despite initial trepidation, Nia grew more comfortable communicating with the doctors, nurses, and therapists on the hospital floor. And, she is always included as an important member of the clinical team. Nia’s medical-surgical rotation junior year was an especially pivotal experience. Nia adjusted to the fast pace on the neurology floor and honed her attention to detail while performing physical assessments on patients with brain injuries. Nia’s clinicals take her to many different sites across the city, including a neighborhood library where Nia works with kids in an after-school literacy program.

In her San Diego high school, Nia developed a passion for biology. At Penn, Nia links her biology interests to her Nutrition major, an interdisciplinary major with coursework in Penn Nursing and the College of Arts and Sciences. Nia enjoyed Professor Matthew Hayes’ class Nutritional Aspects of Disease where she not only studied the biological systems related to nutrition but also focused on the relationship between nutrition and the pathology of disease. The class specifically looked at the role of nutrition in noncommunicable diseases like diabetes, cancer, and obesity. Nia also appreciates a deeper dive into the clinical applications of nutrition science in such courses as Professor Monique Dowd’s Case Studies in Clinical Nutrition.

Nia engages with the West Philadelphia community through her Academically Based Community Service (ABCS) classes. In Professor Monique Dowd’s course Nutrition Throughout the Lifecycle, Nia taught seniors in the LIFE Center about the fundamentals of a healthy diet and how they can use nutrition to manage specific diseases and comorbidities. She also learned to set realistic expectations for her patients; behavioral changes are among the hardest to implement. Nia worked with a younger population in the ABCS class Obesity and Society, where she assisted physical education classes and helped run the fruit stand at a local elementary school. Nia’s ABCS courses redefine her relationship to the classroom and reinforce the importance of working within the community.

Many of Nia’s closest friends and biggest supporters are her teammates on Penn’s NCAA Division I cross country and track and field teams. The athletes develop strong bonds while running long distances and travelling to meets across the country (and sometimes across the ocean). The Penn Relays, one of Nia’s favorite meets and also the world’s oldest relay competition, brings high school, collegiate and professional runners from across the world to Franklin Field. And, recently, Nia and her teammates made history. In front of packed stands at the 2019 Penn Relays, Nia and her distance medley teammates became the first female Ivy League team to win the College Women's Distance Medley Championship and set a new Ivy League record. After their tremendous run, the runners proudly held aloft their golden Penn Relays Wheel, depicting Benjamin Franklin with a winning relay team.

Explore interests to see more you can do at Penn
Explore Interests to see where yours could go at Penn.
Show me more about
Healthcare Philadelphia Sports and Recreation
See All Interests