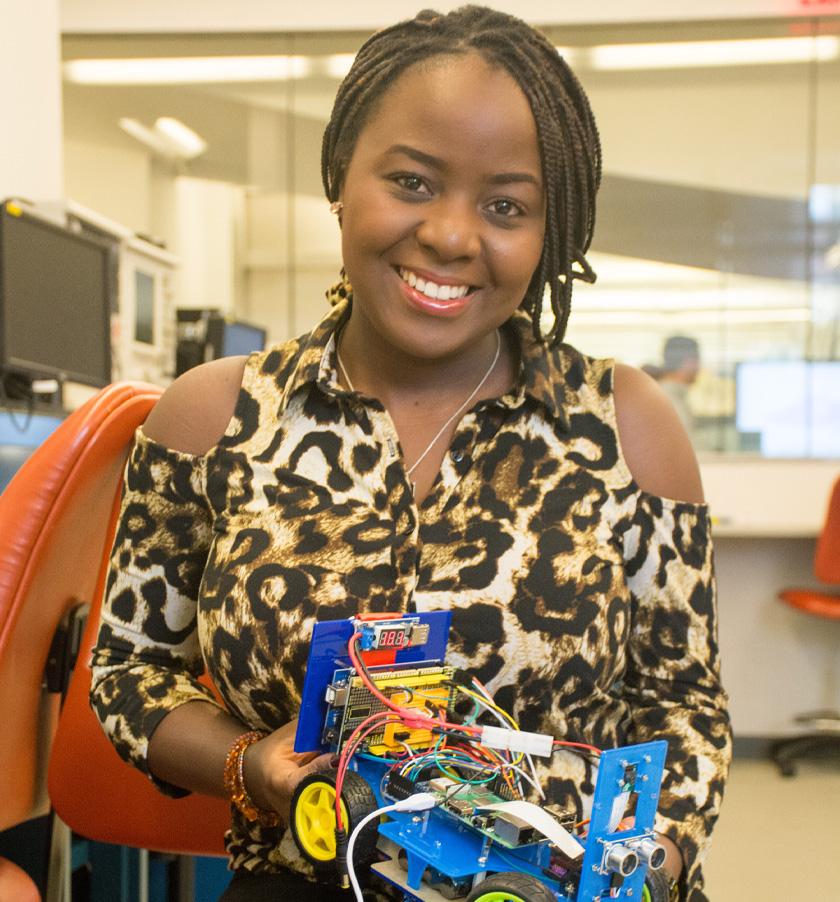 Liliane attended a science and technology high school in Rwanda and was excited to come to Penn, her dream school, to study engineering. At Penn, Liliane is an electrical engineering major with an engineering entrepreneurship minor. Electrical engineering (EE) covers diverse fields, such as embedded systems, analog circuit design, and computer science engineering. Liliane appreciates the collaborative and innovative culture in her classes, which always includes teamwork, problem solving, learning across disciplines, and creativity. Liliane designed her first circuit, an engineering milestone, in ESE 111: Atoms, Bits, Circuits and Systems (ABCs). Also in this course, Liliane and a teammate created a blanket with a vibrating alarm to wake up students who have trouble getting up. Another rewarding course was ESE 215: Electrical Circuits and Systems. This challenging course requires close collaboration on weekly homework and a final group project for which Liliane and her peers designed a filter circuit that clarifies sound for an audio speaker.

Liliane traveled back to her high school, Gashora Girls Academy of Science and Technology (GGAST) in Gashora, Rwanda, with the Rwanda Solar Project, a joint initiative between Penn Engineering and GGAST. The group of Penn students and faculty, including Liliane’s Penn Engineering advisor, Dr. Jorge Santiago, contributed to building a solar-powered water system and solar-powered computers for a Gashora clinic and school, respectively. As a trip leader with knowledge of both American and Rwandan cultures, Liliane guided her peers as they navigated a new cultural context. Back on campus, Liliane assisted the program as an advisor and was part of the interview process to select the next group of students for the program.

Liliane is also a leader in the Penn African Student Association (PASA). She is actively involved in all initiatives and previously led publicity for the group. Liliane is proud of her work helping to organize Africa Week, an annual series of events that include relevant discussions, celebrations, and culture demonstrations such as the calabash competition. PASA unites African students at Penn and Liliane has not only found a home with this group but has learned about both her own culture and other African cultures.

Liliane loves learning about new cultures, which inspired her to enroll in a Penn Global Seminar that focuses on technology and business in China and includes a trip to Beijing and Shanghai during spring break. Before their trip abroad, Liliane and her classmates learned about businesses and technologies in China, such as the high-speed rail system. Their trip was a whirlwind of new experiences. The group met with industry leaders, visited tourist sites such as the Great Wall, and collaborated with students from Jiao Tong University in Shanghai. They also investigated transportation options; Liliane appreciated the accessibility and ease of using the high-speed rail system. Liliane’s immersive experience provided insights into the Chinese culture as well as her own career goals. She can apply her engineering talent to a wide range of industries anywhere in the world.

The Senior Design Project is a culminating Penn Engineering assignment for all majors. In teams, students design and create an original product that positively impacts the world and responds to an engineering challenge. Liliane and her peers want to help alleviate the national opioid crisis. The group of four electrical engineering students is designing a wearable device that can prevent death from opioid overdose. During an overdose, the device automatically injects Narcan, the chemical that reverses opioid overdose, into the user’s system, restoring their breathing.

Liliane’s academic interests span business, technology, and language, which led to her pursue an Engineering Entrepreneurship minor, opportunities to learn Spanish at Penn, and a summer internship that combined consulting, investment, and technology. Her experiences prepare her to start a business or create a product with a social impact, which is one of Liliane’s post-graduation goals.

Explore interests to see more you can do at Penn
Explore Interests to see where yours could go at Penn.
Show me more about
Culture and Identity Global Engagement Innovation Leadership Systems and Technology
See All Interests