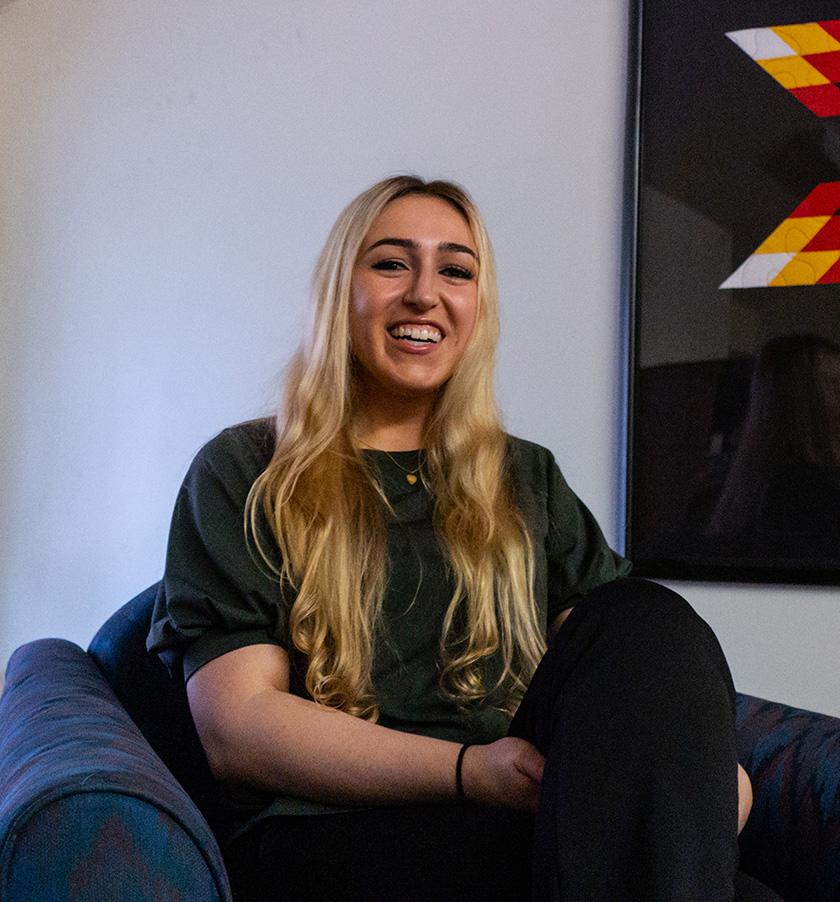 Natives at Penn was a very genuine and welcoming community. It was a small, tight knit group who checked in on me and really wanted the best for me, and it was where I felt comfortable to be vulnerable.

Early on at Penn, Lauren found inspiration in her peers, clubs, and classes to pursue dual concentrations in finance and business analytics. Passionate about reading, writing, and math, Lauren was excited by the new information she was learning and its many creative applications. Lauren approaches her quantitative studies like a puzzle; each case study, financial report, and coding project is an important element of business that she enjoys figuring out. One of Lauren’s favorite classes is Professor Michael Roberts’ Data Science for Finance, which unpacks the applications of Python for corporations. Lauren credits the course content and Professor Roberts’ encouragement for her confidence and interest in coding.

Lauren found a home on campus within the tight-knit community of Natives at Penn, a student group for Native American, Alaskan Native, Native Hawaiian, and Indigenous students. Lauren, a descendant of the Onondaga Nation, met her closest friends in Natives at Penn and always feels supported by the group during difficult times. Lauren helps plan the annual Powwow, a highly anticipated on-campus celebration with performances and food, temporarily moved online during the pandemic. Lauren and her peers are activist leaders at Penn, uplifting Native voices and promoting Native visibility on campus and in the administration. Recently they created a petition to formally recognize Indigenous Peoples’ Day at Penn, joined Penn’s minority student coalition, now called the 7B, and created collaborations with academic and cultural spaces across campus. Through one of these partnerships, Natives at Penn hosted a roundtable conversation at the Penn Museum’s CultureFest to discuss ways to respectfully engage Native communities.

Lauren is part of the Joseph Wharton Scholars (JWS) program, a community that encourages study of the humanities alongside business. JWS students, united by their multidisciplinary academic interests, complete a capstone research project, participate in JWS-specific seminars and social events, and provide each other with academic support. One of the classes that reflects Lauren’s varied interests is the Penn Global Seminar titled ‘People of the Land: Indigeneity and Politics in Argentina and Chile.’ Learning about indigenous communities in South America, Lauren honed in on the historic similarities between indigeneity in North and South America, from colonialism to conflicts over land rights. Pre-pandemic, the class was slated to travel to Argentina. Instead, the students met land activists and legal experts via Zoom. Passionate about Native and Indigenous studies, Lauren is grateful for the online space that allowed these individuals to share their stories.

Lauren feels empowered by her experiences in on-campus and online organizations that promote women and underrepresented groups in business, including Girls Who Invest, Natives Rising, and the Forte College Leadership Conference. In these groups, Lauren has attended conferences on professional development, connected with female leaders in hedge funds and business organizations, and earned a summer internship in the startup world. During her internship at Skillshare, a content sharing website and app, Lauren worked on mergers and acquisitions, learned about financial models, and assisted with strategic decision-making. Back on campus, Lauren is an active member of the Smart Women Securities Club, where students teach other students about finance, and MUSE, the Marketing Undergraduate Student Establishment.

Explore interests to see more you can do at Penn
Explore Interests to see where yours could go at Penn.
Show me more about
Culture and Identity Entrepreneurship Global Engagement Humanities Leadership Political and Social Advocacy Quantitative Studies Social Impact Social Sciences
See All Interests