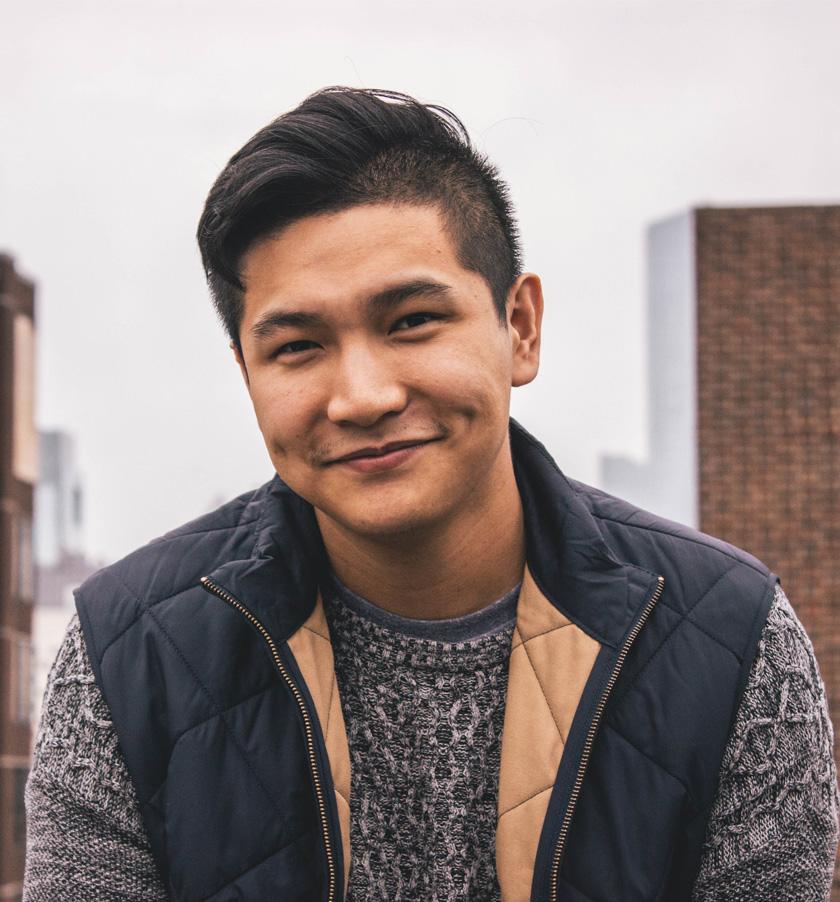 David’s days at Penn are packed from beginning to end, and he enjoys every moment of it. When he first started his Penn journey, David’s mentors at the Pan-Asian American Community House reminded him to get comfortable with the fact that he deserved to be at Penn. Since then, David has embraced leadership opportunities to channel his gift for creating inclusive spaces for others. As a sophomore, David planned a day-long retreat to meet Asian-American activists in Washington, DC for the PEER (Promoting Enriching Experiences and Relationships) mentoring program, which he benefitted from as a first-year mentee. David co-founded “Seven|Eight,” which stems from the Japanese proverb, “You fall down seven times, stand up eight,” for first-generation, low-income Asian American Pacific Islander (AAPI) students on campus. Through this position, he guides students to identify resources to help them succeed and make the most of their four years at Penn. He is one of four featured student panelists in “How to Apply to College,” a massive open online course that first launched in February 2017. For his contributions to and support of students, the Penn Asian Alumni Network recognized David's leadership with their annual James Brister Society Student Leadership Award.

David is the first in his family to go to college. He found meaningful connections and support through Penn’s First-Generation Low-Income program (FGLI), which is based in the Greenfield Intercultural Center. The FGLI program began in 2016 and supports students’ academic, personal, and social transition needs while facilitating community building and a sense of belonging. Greenfield’s mission is to enhance students' intercultural knowledge, competency, and leadership through programs, advising, and advocacy.

Penn is committed to supporting both first-generation and low-income college students in their pursuit of higher education. We have multiple support systems on campus such as the FirstGeneration, Low Income (FGLI) program which began in 2016. Students who will be the first in their families to graduate from college, or who come from low-income families, receive guidance regarding their academic, personal, and social needs while providing a close-knit sense of community. Additionally, student-led organizations such as Penn First provide support through mentorship programs and social events.

When David started at Penn, he saw himself as a pre-med student and followed through with pre-med course requirements, including finding a work-study job as a research assistant for the Good Lab in the Department of Cell and Developmental Biology. However, as he explored more, David realized his career interests were evolving towards new inspirations and needs in healthcare, more broadly. Now, David finds resonance and opportunities through his Health and Societies major. During his time at Penn, David volunteered with the University City Hospital Coalition and the United Community Clinic, both of which provide free medical services to people in West Philadelphia.

Growing up in the City of Brotherly Love, David’s decision to come to Penn was a big one. Born and raised in Philly, David knew he wanted to make a big impact in his community, so when he arrived at Penn, he hit the ground running. From volunteering in West Philadelphia to co-founding a non-profit organization called Collective Success Network that offers career advice for First-Generation Low-Income students from Penn, Temple, and Drexel, to serving as the director of student programming for the annual Ivy League conference for first-generation students, 1vyG hosted at Penn this year, David is making a lasting impact.

The most historic city in America is your new home. Our city isn’t just about history, though. It’s a mix of then and now with an eye toward the future.  A hub of art, culture, and innovation -- you will never run out of things to do in Philadelphia. Penn is also actively involved in Philadelphia. We are passionate about the city we call home and our students do more than discuss social issues, they take action.

Learn more about Penn's relationship with the City of Philadelphia.

Explore interests to see more you can do at Penn
Explore Interests to see where yours could go at Penn.
Show me more about
Culture and Identity Leadership Philadelphia Research
See All Interests