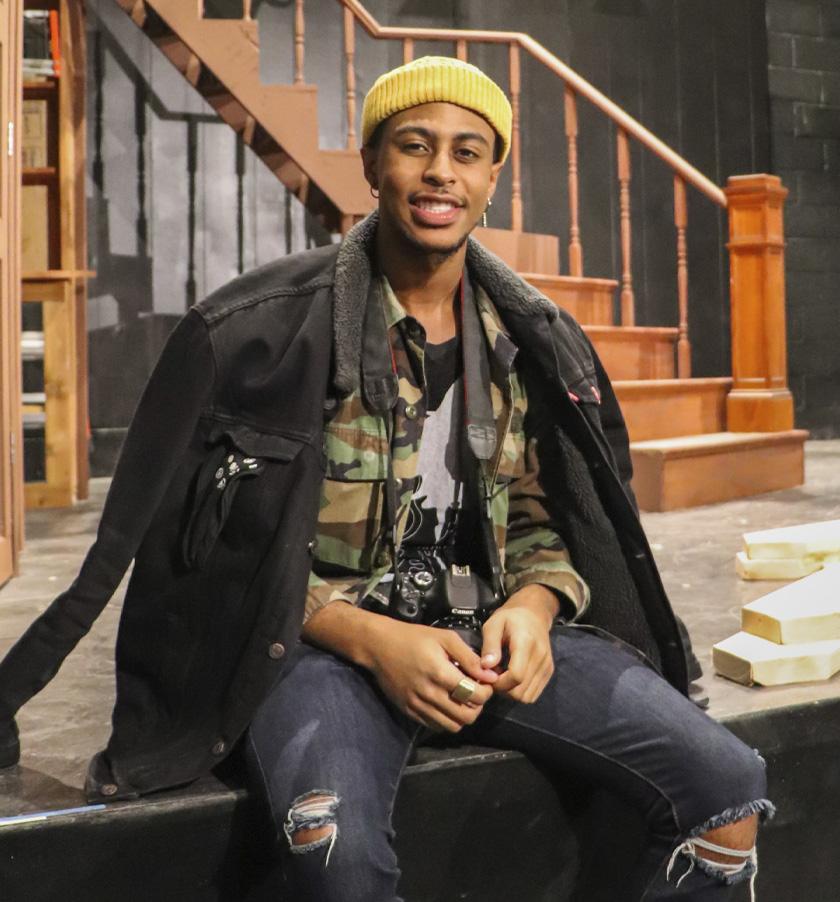 I've known for a while that I just have all these different interests. I'm not the type of person who likes to limit myself because I feel like there's so many things out there to learn and experience.

When he first visited Penn in high school through Leadership Enterprise for a Diverse America (LEDA), Chancelor learned that Penn was a space where he would be pushed to grow academically. So when he arrived on campus from Atlanta, Georgia the following fall, Chancelor was enthusiastic about taking classes that coincided with his wide interests, including science, math, public health, arts, and music. Building on these multidisciplinary passions, Chancelor declared a Health & Societies (HSOC) major which he pursues alongside pre-dental coursework.

In one of his first HSOC classes, Comparative Medicine, Chancelor learned about healthcare from a historical and sociological perspective, and gained an appreciation for how cultural and community practices can coexist with biomedicine. Meanwhile, in the Summer Health Professions Education Program (SHPEP) at UCLA, Chancelor expanded his understanding of health disparities across diverse communities. Approaching healthcare from this comprehensive perspective, Chancelor plans to expand access to dentistry by practicing in under-resourced communities.

Chancelor enjoyed biology, chemistry, and math in high school and knew he wanted to continue studying science and math at Penn. Chancelor’s favorite Penn professors are brilliant scientists and mathematicians as well as supportive mentors who are committed to their students’ success. As Chancelor navigated the transition from high school to the rigors of college, he frequently went to office hours where he got to know his professors outside the classroom. Chancelor’s mentors include his Math 103 professor, Nakia Rimmer who provides his students with extra resources and lengthy office hours. Similarly, Professor Donald Berry, Chancelor’s Chemistry 102 instructor, took time to understand Chancelor’s strengths and challenges, and worked with him throughout the semester. And while Chancelor now informally tutors his peers in chemistry and math, he continues to meet with his mentors to share his progress and stay connected.

Chancelor traces his involvement in performing arts to his freshman year Theatre Arts class, THAR 076: Theatre in Philadelphia with Professors Rosemary Malague and James Schlatter. Every Thursday night, Chancelor and his classmates went to a play in Philadelphia, in venues large, small, and out of the ordinary, including the Woodlands Cemetery a few blocks from campus. During their three-hour seminar, the class would engage in discussion about each performance and the role of theatre in Philadelphia. Chancelor joined the African American Arts Alliance (4A) to continue his immersion in theatre. Chancelor loves the energy at 4A meetings and rehearsals. As an Assistant Producer, he makes sure that everything runs smoothly and that the cast feels supported. As a team, 4A put on a great performance and sold out tickets for their Spring 2019 production, Long Time Since Yesterday, which was followed by another successful season performing Milk Like Sugar in the fall.

Chancelor’s interest in the arts not only includes theatre but also extends to music and visual arts. Chancelor is part of SPEC-Trum, the University of Pennsylvania’s Social Planning and Events Committee to Represent Undergraduate Minorities. SPEC-Trum plans concert sand events featuring artists like Tierra Whack and Rico Nasty. This past fall, the Committee hosted their inaugural TRUM Tiny Desk in the Rodin College House rooftop lounge. With the city as a glittering backdrop, local artists, including Penn students, played for a sold-out crowd. Chancelor is also the Director of Marketing for the student-led photography agency Oh Snap. Starting as a photographer at Oh Snap, Chancelor now leads branding and outreach initiatives to share the agency’s work and connect to an even wider clientele across campus.

Explore interests to see more you can do at Penn
Explore Interests to see where yours could go at Penn.
Show me more about
Arts and Culture Creative and Performing Arts Leadership Natural Sciences Social Sciences
See All Interests