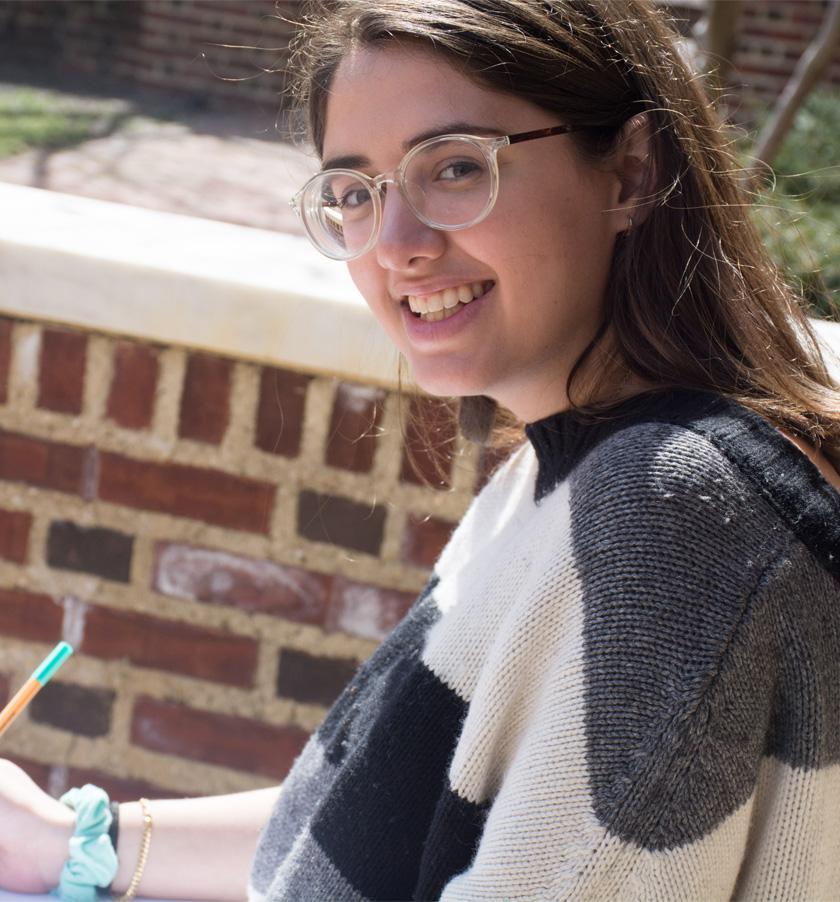 I’ve been focusing on analog circuits within electrical engineering which is a specific route not a lot of people take. I also wanted to take classes on education, since I always imagined myself becoming a teacher later on down the road.

Blanca, a Penn Engineering student, began her first year with previous lab experience at the University of Texas at San Antonio Health Science Center and a strong interest in physical sciences. Initially a Chemical and Biomolecular Engineering major, Blanca also explored computer engineering, but ultimately found a perfect fit with Electrical Engineering. Blanca values the flexibility and small size of the Electrical Engineering department; most of Blanca’s Electrical and Systems Engineering classes have fewer than 30 students, which has encouraged her to go out of her comfort zone and create connections with undergraduate and graduate-level peers. In fact, halfway through her major, Blanca decided to submatriculate into an Electrical Engineering master’s program. Within four years, Blanca will graduate with both a bachelor’s and master’s degree in Electrical Engineering while still having space in her schedule to pursue other academic interests.

One of the ways that Blanca engages on campus is as a Teaching Assistant (TA) for several Electrical Engineering classes including ESE 150: Digital Audio Basics; ESE 215: Electrical Circuits and Systems; and ESE 319: Fundamentals of Solid State Circuits. Given her responsibilities as a student and TA, Blanca views the Detkin Lab on campus as a second home, a space where she can relax with friends, and also collaborate with peers and faculty.

Blanca loves the hands-on aspects of lab work and the way experiments make abstract ideas tangible. As Head Lab TA for Circuit Theory, Blanca remembers supporting students as they completed their final projects, which involved creating speakers that can hook up to phones or computers. This is a challenging feat and often the first difficult project students encounter in Penn Engineering. Blanca assisted her students during their many hours of effort and yes, frustration, too. In these moments, Blanca extended her office hours to help move them past setbacks. The results are shared on Demo Day – students are eager to share their work and music is everywhere!

Blanca’s research experiences and academic work demonstrate an aptitude for discovery. In high school, Blanca’s work at the Voelcker Biomedical Research Academy in San Antonio illuminated the shape and behavior of DNA. Alongside Penn peers and advisor Dr. Aflatouni, Blanca is currently working on her Senior Design Project, a culminating project within the Penn Engineering curriculum. Blanca’s group is designing a radar that measures breathing rate. This flexible and non-contact device only needs to be placed near an individual to assess respiratory rates. Among other uses, their project has the potential to impact individuals who suffer from irregular sleeping patterns, such as those with sleep apnea. Data on individuals’ respiratory rates will be sent directly to personal electronic devices.

Blanca is a mentor and teacher to students in the West Philly community. As part of the Big Brothers Big Sisters program, Blanca spent meaningful time with her little sister, a student at Lea Elementary School. She is also involved with the Netter Center for Community Partnerships where she is the program coordinator for the science fair branch of Moelis Access Science (MAS). MAS brings together Penn students committed to contributing to STEM education in local K-12 classrooms. In this role, Blanca and her teammates conduct engaging science experiments, ranging from making ice cream to launching water rockets, with students in nearby West Philadelphia schools. Blanca’s work helps students reimagine academic experiences and make meaningful connections to scientific processes. Blanca intends to integrate her passion for education into her post-grad experiences either through volunteering or teaching.

Explore interests to see more you can do at Penn
Explore Interests to see where yours could go at Penn.
Show me more about
Innovation Leadership Social Impact Systems and Technology
See All Interests