The age-old question of “where are you going to college?” turns into a different kind of question once you are in, “why did you choose to go there?”

I discovered Penn from my grandmother who had spent her youth working at HUP and visiting her brother who attended Wharton. Being from a beach town in North Carolina, this would be a huge change for me. With most of my friends looking at schools such as UNC and NC State, I was on this journey alone but I wanted that new experience for myself. It was a chance to start over in a completely new city. At first, I wondered if it was even worth applying, why in the world would they choose me? However, I decided that I wanted to attend nursing school, and to say Penn was the best option, was an understatement. It quickly became my dream school for a multitude of reasons.

When I visited the school in February of my senior year, I met with a representative from Penn Nursing as well as a nursing student. Prior to our meeting, I had the idea in my head that since Penn was an Ivy League school, I may not fit in, but I could not have been more wrong. One of the reasons I love Penn is because of the diverse student body. It was also a relief to find out that thriving academically and maintaining a social life was easy to accomplish.

I am currently a junior in the School of Nursing, another reason I chose Penn. Being directly admitted into the Nursing School as a freshman with the ability to take classes alongside students in all the Penn colleges has allowed me to meet and converse with all types of people.  Considering Penn Nursing School is rated #1 in the world, the choice to attend was an easy one. There are two renowned hospitals, HUP and CHOP, just steps from the campus, which allows students to take advantage of their locale during clinicals.

Junior year, the question morphs into “What are you doing after graduation?”

Penn Nursing has a fantastic program called submatriculation, which allows undergraduates to apply to one of the eleven master programs that Penn offers for nursing. If accepted, students can begin taking general requirement classes during senior year then following graduation with a BSN, you have five years to complete the master’s program.

In my 2 ½ years at Penn, I have grown tremendously, both as a student and as a person. Penn has helped me become the type of friend, sister, future nurse, and independent thinker that I have always strived to be. The confidence in my nursing skills increases daily, and I cannot wait to start helping those that are most in need.

Becoming a Penn Nursing student was the best decision I have made to date.

Hello, I am Sydney, and no, I am not from Australia! I am currently a student in the School of Nursing pursuing my BSN. My campus activities consist of: the production of the children’s magazine Unearthed where I serve as Social Chair, a member of Sigma Kappa sorority, and serve as student liaison for the Nursing School where I meet with prospective nursing students. When not in my scrubs or spending time at the hospital, I enjoy hanging out with friends, knitting, watching The Office for the 10th time, and trying new restaurants around the city.

View all posts by Sydney Meet The Penn Admissions Bloggers 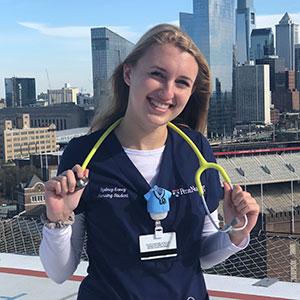