It’s about that time of the semester when you look at your busy schedule and realize that it… is ending? In three weeks?? Classes ending?!? I know you’re probably as shocked as I am, considering the fact that most Penn students (and even prospective students) have a habit of getting caught up in the whirlwind that is studying and extra curriculars and socialization (okay… maybe not that much socialization, but you get the idea). While I know I do have finals to study for and papers to write, I also really want to make sure to spend time doing things that not only make me happy, but also allow me to step away from the fast-paced Penn environment. Below I have accumulated a list of things that I would like to do before these three weeks end. This might just serve as a reminder for myself, but it also might inspire you to do the same!

I’ve been telling myself all year that I would visit an art museum, but somehow I haven’t found the time to. I’ve been to the Philadelphia Museum of Art countless times, but I’ve never been to the Barnes Foundation. I could also stop by the Institute of Contemporary Art… conveniently places 1 block away from campus. That might be my best bet.

2. Have a movie night

Last semester, I took a cinema studies class which required you to watch a ton of movies. Since taking the class, I’ve realized that I’ve only watched maybe 2 during the entirety of the Spring semester. This is such a big deal for me, because usually on my Winter/Summer breaks, I’m watching a movie every other day. I still don’t know if I’ll revisit my favorites (like Amelie or Roman Holiday) or watch some classics I’ve never seen before (although I’ve watched many movies of a similar genre, I’ve never seen Star Wars… please don’t yell at me.), but either way I’m sure I’ll have a great time eating a bag or two of popcorn and rolling into a blanket burrito to watch.

3. Take a really long walk with no destination

This sounds dumb, I know, but as someone who has every second of their day scheduled, mindless wandering can be quite a precious gift. I’ve walked to Rittenhouse a few times, and even to South Street, but usually it’s to meet someone or to run errands. Maybe I’ll walk alone, or maybe I’ll bring a friend, but I think I’ll enjoy not having anywhere to be for a few hours.

I really want to start expanding my writing portfolio for my own personal satisfaction and also for more opportunities to get published in the future. I’ve had my poetry featured in 34th street, and prose and poetry featured on the literary magazine I work for called Penn Flux (perks of being an editor?), but I’ve been looking to send some new submissions to other magazines as well. Every time something is going wrong in my life, I know that I can write about it to gain clarity and find relief. Because I’ve been so busy this semester, writing on a good schedule has been hard – and you know what happens when I can’t write about the things that are going on in my life? Awful things, friend. awful things.

Who knows if I’ll accomplish any of these goals, but I do feel really optimistic after writing them down. I might even document my experiences and make a post about them in the future! If you have any other suggestions of fun things I can do in the next three weeks (or any time in the future) be sure to comment below!

I'm majoring in Nursing and minoring in Creative Writing. Although I grew up on a farm in South Jersey, my heart lies in the city. As for my campus involvement, I'm a dancer in Penn Masti, a radio DJ at WQHS Radio, and co-chair of Penn SNUGS (Penn Student Nurses Understanding Gender and Sexuality). I'm constantly caught in a daydream, have a passion for helping others, and plan on building myself an extraordinary life. Join me on my journey!

All photos are mine unless otherwise noted.

View all posts by Nina Meet The Penn Admissions Bloggers 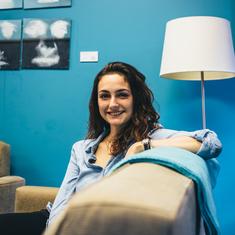