A Summer of Resetting, Relaxing, and Rejuvenating | Penn Admissions Skip to main content

A Summer of Resetting, Relaxing, and Rejuvenating
Olivia | August 28, 2018

When I moved out of my freshman dorm room in Ware College House in the beginning of May, I was in a hazy state comprised of post-finals giddiness, excitement for summer, and disbelief that my freshman year was already over. Four long months of summer stretched ahead of me, filled with the promise of a trip to Israel, ten weeks of an internship at a data science consulting startup, long weekends at the beach, and reunions with high school friends. As soon as I got home, I shuttled my boxes off to the basement, where they sat untouched until a few days ago.

It is mid-August, three and a half months later, and I sit packing up my stuff to move into my sophomore year apartment in one short week. It’s hard to believe that the summer is over, as it always is; each one seems to go by faster and faster. Summer was a much needed break and time for a reset, both mentally and physically, after a crazy nine months of the change, hard work, and excitement present in a first year of college. I was excited to live at home for the summer and only worked three days a week, leaving plenty of time for rest and things I hadn’t had time to think about during the summer; some of the more exciting summer hobbies included learning to cook with my younger sister in preparation for my kitchen apartment, getting back into creative writing, reading the Game of Thrones book series, journaling daily, binging the first two seasons of The Great British Baking Show with my family, and starting to train for a half marathon I’ll be running in October. I realized how much I’d missed my family and enjoyed a slower pace of life as I spent time playing board games with them, taking long walks at the beach, and appreciating the comforts of home cooking and laundry.

I was excited to dive into my job in June as a data analytics intern, but I had no idea what it would look like, with only a vague idea of what the big concept of “data science” really meant. I wondered how much my internship would be related to the computer science work I’d done in my classes, if at all. Perhaps surprisingly, after a few weeks, I found that my first year at Penn had given me a hugely useful skill that I utilized every single day at work: the ability to learn quickly and pick up new skills on my own. The internship was structured in a way that guided us through the basics of R and mySQL, two programs that I’d had limited exposure to before this job, before throwing us right into the world of data exploration with little direction other than to explore and learn. Before a year at Penn, this concept probably would have been a lot more intimidating to me, but after approaching numerous problem sets in multiple classes throughout a year in this same way, I found that I was a lot more confident in my ability to learn new softwares/techniques quickly, ask the right questions, and find resources that made it possible for me to find a solution.

I’ve increasingly found that this ability, more than any concrete skill, is incredibly valuable in all areas. After talking to many professionals this summer, I’ve heard time and time again that being able to learn quickly, adapt, and figure things out will get you far, as industries are constantly changing and the best jobs are the ones in which you’re challenged to learn and push yourself every single day. As hard as it was to adjust to this style of learning in my first few months at Penn, being thrown into a problem and being expected to figure it out without much direction, I was so grateful for this experience this summer as I learned that this is truly how real work happens. I also learned that everyone still Googles things, at every level, not just students! As the data analytics world is filled with numerous techniques and approaches to any problem, I found that my boss was likely in many situations to do the same exact Google search that I’d have performed if I asked him how to approach something. Sometimes it was better to do my research first and see if I could figure something out until I got stuck and needed a second opinion. I’m so happy to have had this experience this summer, and I discovered a love for data science that I’m hoping to continue to pursue at Penn.

As I near the beginning of my sophomore year, I have a few simple goals in mind. First, to prioritize my health first, including sleeping enough, eating well, and working out, because I know from experience that with these, everything else seems to fall in line - I’m more productive, less stressed, and more focused. I also really want to focus on spending time doing things that I really enjoy, whether that’s in a club developing a hobby, spending time with friends, or taking a class I’m really interested in. It is so easy to get caught up in the little, stressful details of college life, but I’m hoping to focus on the big picture and create some great memories this year. Finally, I really want to continue to focus on developing meaningful relationships by staying connected to my family and friends from home and reaching out more to friends at school and people I’d love to get to know better. College is four short years, and I’m ready to take on my second!

I am from Wilmington, Delaware, studying Computer Science with interests in creative writing, art, entrepreneurship, and data science. On-campus, I'm involved in a publication, a volunteer organization, religious life, and Greek life. I've loved learning more about Penn and the students here and taking advantage of all the great opportunities Penn and Philly have to offer. In my free time, I love running, cooking, exploring the city, and spending time with friends and family.

View all posts by Olivia Meet The Penn Admissions Bloggers 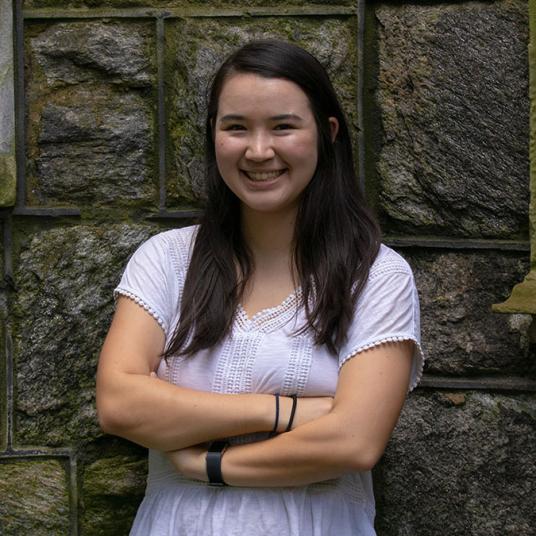