When I first came to Penn, my name was not Seung-Hyun. Like many immigrants in this country, I took on another name that was much more pronounceable and more “palatable” to the ears. I remember that fateful day at Ralph’s (a grocery store chain in California) when I was sitting in the grocery cart as my mom pushed. She suddenly heard someone say the name “Daniel” across the aisle. The name was so pleasing to her ears. “Why don’t we just call you Daniel,” she said in Korean. I nodded in agreement. As a six-year old who knew zero English at that time, I liked the smoothness of the -iel and the biblical story of Daniel that my mom relayed to me. In my first-grade class, the teacher gave me a name tag with “Daniel” so I could learn how to spell it. “That’s my name,” I thought happily.

When I came to Penn, I was Daniel. I had come to Penn wanting to become (secretly) a young-adult fiction writer. Having had a slight obsession with John Green novels as a high-schooler, I aspired to craft stories that captured the human condition (aka the angst of youth!). On my “Why Penn?” essay, I wrote my desire to be involved with the Kelly Writers House, Writers without Borders, and Penn’s amazing literary magazines. I said that I would be a “frenzy, unicorn-obsessed freethinker” at Penn (damn, I just really wanted to be hipster). It’s strange to think about that now. I am neither heavily involved with the Writers House nor with any form of journalism and magazine (heck, I don’t even read them). I also no longer wish to be a fiction writer. Most of all, I am no longer Daniel.

And yet, I feel that I have stayed true to this past self, even though it is almost unrecognizable to me now. I am still and have always been a unicorn-obsessed freethinker, though that journey of becoming happened in ways I never expected. This blog is about that process — of how we can be growing and becoming different selves while staying whole and true to that core self. You might wonder why I titled this post “Rant for Growing Souls.” I say rant, because words are not easy for me still (or ever). My growing stories are not the same as others, but I hope that they inform you and let you carve your own process.

I will not tell the story of why I changed my name here. I will say one thing though; names are living entities, embodying and shaping the identities we inhabit. Changing my name back to Seung-Hyun is part of that process of reclaiming my identity as a Korean-American, but it is also about creating a whole new, more confident self. That’s what reflection is all about for me. Your journey at Penn will be a mixture of all these things: changing, reverting, and creating. You’ll have fun if you choose to, just like I am.

I'm majoring in English with minors in Asian American Studies and Theatre Arts. As an aspiring multidisciplinary scholar and artist, I love to theorize and philosophize - basically overthinking too much about anything and everything. I am strongly passionate about civil and human rights, social and environmental justice, and just about anything that involves helping people and empathizing beyond boundaries. I hope to combine my activist/scholarly interests with my artistic practice in theater, film, and storytelling!

I was born in Busan, South Korea, but moved to the flat suburbs of Southern California when I was six. I decided to come to Penn partially because I needed public transport and hated driving. Living in Philly has been full of new discoveries and growths, and I'm so glad to have called this place my home for the past three years. I've also traveled extensively during my time at Penn, interning in Israel and India and studying abroad in London. Hoping to wander some more this year and after graduation!

View all posts by Seung-Hyun Meet The Penn Admissions Bloggers 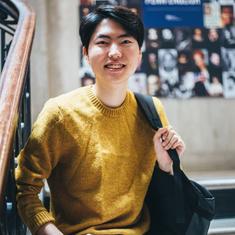