Transitioning to life at Penn has been an emotional roller coaster. There have been plenty of ups and downs, sudden jolts, and exciting surprises. My transition to Penn is not yet over, but every single day, despite the unexpected challenges, Penn feels more and more like my home.

When I first got to campus, I felt like a freshman all over again. I had no idea how to use my Penncard to get into my college house, no idea what any of the buildings were, and no clue where the dining hall was. I had to re-learn almost everything I thought I knew about college life. It was tricky. Although I was a sophomore, I was also not not a freshman.

The first few weeks were the hardest socially. I would walk around campus and not recognize many faces. Even the faces I did recognize seemed to be engrossed in conversations about what they did over the summer and how they missed living in the Quad. I had to find and make friends in clubs, in my dorm, in my classes, and even while waiting in line at Starbucks under Commons (aka stommons). Although people were open to meeting new people and making new friends, I still felt like I wasn’t meeting enough people. I think a lot of new students feel this way when they go to college for the first time or when they go to a new school. It’s really easy to look at all the perfectly posed Instagrams your home friends are posting of themselves at school and wonder why you don’t have all of that after your first hour of New Student Orientation (NSO).

I was lucky to have a great group of friends who were also transfers, with whom I spent (and currently spend) much of my time with. Each year Penn has about 200 new transfer students, so there is a large (and very welcoming) transfer contingent on campus. It was really nice having the camaraderie of all of us going through the same transition

It wasn’t until I became more involved in clubs on campus and developed a routine that I finally began to feel like a “Normal Penn Student” — whatever that is. I found myself joining the Kite and Key Society, which is Penn’s student tour guide association, and Phi Alpha Delta, Penn’s only pre-law fraternity. I’ve had the pleasure of meeting new friends and even just friendly acquaintances through both of these endeavors. I feel connected to and a part of the Penn community when I walk down Locust and see/say hi to people I know.

Of course, some of my friends now I met through mutual friends and their friends, and so on. Whether you are a transfer student or new freshman, my biggest piece of advice is to be open to and excited about meeting new people. Even if you *think* they aren’t going to be your new BFF, get coffee or tea or even a full 5-course meal with them. You might just be surprised.

I still have some days where I feel like I have no idea what I’m doing here. Everyone does. And that is OKAY. This is college — a time when we are supposed to make mistakes and figure things out. My transition to Penn might not have been perfect, but I wouldn’t change a thing. Because ultimately, every time I walk down Locust Walk after a tough day, I can’t help but get butterflies. I can now proudly say that I am not a transfer, not a freshman, but a Penn sophomore.

Welcome to the world of Penn! I am in the College studying Politics, Philosophy, and Economics with a concentration in Choice and Behavior. I came to Penn last year as a transfer student from a small liberal arts school up north and I have absolutely loved my time here. When I am not writing my stream of consciousness on this blog, I am working at the Admissions Visitor Center, volunteering with Penn Best Buddies, doing research on management and organizational behavior with a brilliant Penn professor, and thinking about the law with Phi Alpha Delta, Penn’s only pre-law professional fraternity. I love leisurely strolls on Locust, cold brew from Saxbys, and all the Magic Carpet cookies on this side of the Schuylkill! Tag along for what will undoubtedly be a fantastic ride!

View all posts by Zach Meet The Penn Admissions Bloggers 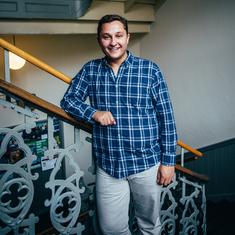 Back to
Admissions Blog