No one high school senior’s college process is the same as the next. Regardless of outcomes and final school placements, everyone arrives at their final destination in their own unique way. When I began thinking about where I wanted to go to school, nursing directed my search. I knew I was looking for a four-year, accredited nursing school. But that was about it. Rural and urban, small and large, I looked at them all. Well, virtually at least. I was on the varsity track and field and the cross country, both of which I hated missing, so college road trips were just not for me. I also felt as though I could find out all I needed from a school for their website and thorough research. Once I was accepted, I could then take the next step to physically visit the various schools to see if I could envision myself on its grounds for the next four years.

Specifically, with Penn, I went back and forth many times for how I wanted to go about its application process. Penn was the only school I actually visited before applying as it was just a quick drive down from New Jersey. I loved the campus, with its brick-paved walkways and grand old buildings, and the city skyline resting in the background. My meet-and-greet at the nursing school with Marianne Smith, who continues to hold these informal meetings with potential nursing school applicants, was so lovely and she gave me some great advice for the whole college search process as well as tips for enjoying my senior year. This meeting was followed by lunch with a current nursing student. I originally thought I would probe them with questions, but instead, I listened and really took in all they had to say about life at Penn, the nursing school, and their time straddling the social and academic life here at Penn. I left that day knowing Penn was a place I could see myself potentially fitting in. However, this is way easier said than done, something my mom was sure to remind me of as we drove away that day. I could set my heights high, but I had to be careful about getting my hopes up.

This visit was in the spring of my junior year. Summer flew by as I was brainstorming all my options for where I was going to spend my next four years. Penn still had a certain aura to it in my mind, but I knew I had to be realistic and put together a list of about seven schools I could potentially see myself at, pending their approval of my application. While this was a great milestone to be at by the end of the summer, I needed to think about one more thing: was I going to submit my Penn application early decision? I knew my chances of getting in were slightly raised by submitting my application early. That was a good thing. Right? The more and more I thought about this bunding decision I was potentially going to submit myself to on November 1st, the more and more I knew I could not do it. I had never been one to let someone else tell me what to do or make a final decision for me. I headed and sought out advice almost regularly, but ultimately the final decision was always made by me. Personally, I knew the early decision route, if I was to be accepted, would only make me question if Penn was really the school I wanted to choose to attend. Thus, I submitted all of my other applications through their respective early action or rolling process and sat on my Penn application until it was due for the regular decision deadline in January.

This decision of mine in retrospect was the perfect one for me. After being accepted to Penn, I sat down with my parents to go through the pros and cons of some of the other schools I was also accepted to, financially, academically, etc. I then had the time myself to decide which school I knew would be best for me and the setting I could see myself thriving. Every day, my mind kept going back to Penn and here I am. This timeline for me could have been a much more streamlined one, but hindsight is always 20/20. I am just glad that I trusted my instinct to make the decision my way in the first place, and I have never once regretted it.

Welcome to my life at Penn! My name is Sophie and I am in the School of Nursing on track to receive my Bachelor of Science in Nursing. I truly have a passion for innovation in the healthcare field, particularly improving patient outcomes both from a hands-on perspective as well as through the administrative side. On-campus, I am involved as a member in our campus’s chapters for Camp Kesem and Best Buddies, a general body member of Student Nurses at Penn, an Innovation and Impact committee member for the Wharton Undergraduate Healthcare Club, as well as an active member for my sorority, Chi Omega.

View all posts by Sophie Meet The Penn Admissions Bloggers 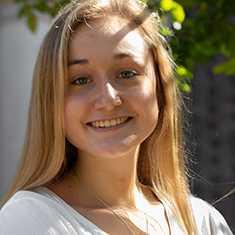