When I was in high school, my greatest fear was failing a class. I’m exaggerating of course. There were things I feared more - spiders, heights, walking through the hallway with my backpack unzipped. But, failing a class seemed like the true end-all be-all of my high school experience. And, in high school, I never failed. While I wasn’t a genius, I was a good student and a combination of good memory and fear of failing kept me afloat in my classes. I remember having a tough time in most of my math classes, but language classes were particularly easy for me. So it was a shock when I came to Penn and almost failed Spanish 212.

Let’s back up. In high school, I took AP Spanish. At the time, I wanted to major or minor in Spanish in college. I was passionate about the language because it connected me to my Puerto Rican heritage and because it sounded really impressive to know how to order a full meal in Spanish. Coming to Penn, I was certain that I would study something in Spanish. This belief compelled me to register for a Spanish class even though my AP credit allowed me to test out of Penn’s language requirement. In fact, because I had received a 5 on the AP Spanish exam, Penn insisted that I take Spanish 212, the advanced grammar and composition class that is two levels above the final class for the language requirement. I begged the registration office to let me take Spanish 202, a class one level down, but they promised that my performance on the AP exam proved I could handle Spanish 212.

Spanish 212 was a tiny class taught in a cramped classroom in Williams Hall. Our professor wore entirely pastel colored clothing. He spoke in a flowing Madrid accent and regaled us with stories about his time in Barcelona, sipping wine on hotel balconies and eating tapas. He made a life of studying Spanish seem effortless. But, the first test was far from effortless. I remember sweating through the first exam like I had just run a marathon. I barely understood what I was reading in the multiple choice questions and the fill-in-the-blank questions felt like giant, gaping holes that were going to swallow me up. My classmates seemed calmer than me, though some tapped their feet anxiously on the cold tile floor. They scribbled in answers, and I felt a deep desire to sneak a peek at their writing. But it wouldn’t help. Even if I could have seen their answers from our spaced out desks, I wouldn’t have understood them.

The semester flew by in a flurry of firsts: first friends, first theater auditions, first trip to Wawa, first work-study job, first night in Center City. And then I got my first D- on an exam. After a rocky first exam- I thought I had earned a B- or C+, instead I completely flunked my second of three Spanish exams. I remember the weight of the failed exam in my hands. It felt like it would crush me. How could this have happened? What was I going to do? On the top of my exam, in red ink, my professor wrote “See me.”

My professor and I talked about the test and we reviewed a particular section on future-perfect conjugations. He told me that he didn’t understand why I had done poorly on the exam. “Your homework is good, and you explain your ideas well in class”, he said. “So why did you fail?”

It was then that I realized I had never truly learned the material in our class. Most of my classmates were familiar with these advanced conjugations because they had learned them in high school. I hadn’t learned them. Yes, I got a 5 on the AP Spanish exam, but I never internalized this difficult material. I explained to my professor that when faced with these questions on the test, the answer never occurred to me.

“I never learned these conjugations,” I said, “so when I have to put a word into this sentence, this answer doesn’t even come up as a possibility in my mind.”

“You really shouldn’t have taken this class,” he replied.

I know, I thought to myself.

My professor looked at his calendar. It was one week until the final exam. He looked back towards me with resolve.

“You will get an A on this next exam,” he said. “You need to study. Study hard. Partner up with someone from class and study together. You can learn this.”

I was shocked by his confidence in me. I thought he was completely crazy. There was no way I could recover my grade in such a Herculean way. But I had no other choice.

The next day, I messaged a friend from class and asked her to study with me. I had been studying alone until this point, because I was too nervous to admit that I didn’t understand the material. Setting my pride aside, I met up with my study partner in Van Pelt library and we studied and studied and studied some more. She was immensely helpful and showed me her system to create grammar flashcards and some of the tricks she used to remember difficult conjugations. We wrote out everything we had learned in the class and what we anticipated would be on the exam. It felt a training montage from Rocky. Here I was, days before my first college final, sprinting up a hill made of Spanish grammar conjugations and literature analysis.

The day of the exam came and I sat in our cramped classroom for the last time. This time, the exam didn’t scare me. I had prepared well and I could feel that all of my practice was paying off. Believe me, the test wasn’t a complete breeze. I still stumbled over some questions and, when I finished, I checked my answers again and again. When the exam timer beeped, I rose from my seat, handed in my test, and hoped for the best.

A week went by and I went home to my family for winter break. One night, while I was making holiday sugar cookies with my boyfriend, my phone buzzed. I turned it on and saw an e-mail notification. My Spanish final grade had been posted. Heart racing, I logged onto Canvas. And there it was: “Final Exam: A-”

I truly, completely, 100% could not believe it. I had done it. I earned an A by committing myself to facing a seemingly impossible challenged I had rescued myself from the brink of a failed class. It was the best Christmas gift I could’ve gotten and an incredible way to end my first semester at Penn.

I’m not telling you this story because I want to brag about that time I got an A in a hard class. I'm telling you this story because I want you to know that you are not a failure and you should never give up on yourself. When I was a freshman, I believed that my test grade equaled my self-worth and when I did badly on a test, it meant that something was wrong with me. That couldn’t be farther from the truth. Our worth as people and as students is not determined by our grades, but we have to fight for ourselves if we want to succeed.

I’ve said it before and I will say it a million more times, if you are struggling at Penn, ask for help! My professor forced me into asking for help, and I am forever grateful to him for pushing me in the right direction. Penn is infinitely more difficult when you face its challenges alone. Reach out. Get help. Go to your professor’s office hours. Visit the Weingarten Learning Resources Center, where they can help you shape a study schedule for midterms, finals, or any test in between. There are so many people on this campus who want to help you succeed, but in order to get help, you have to ask for it.

Hi, my name is Izzy and I am in the College of Arts and Sciences, studying English with a concentration in Creative Writing. My work has been published in the Red Cedar Review, F-Word magazine, r.kv.r.y. the quarterly literary journal, and the Penn Review. I currently write for Penn Appetit and can often be found in the Kelly Writers House or Van Pelt library circulation desk. When I'm not writing or rewriting, I am exploring Philadelphia's flavorful food scene, looking at rescue cats online, or making DIY gifts for my friends.

View all posts by Izzy Meet The Penn Admissions Bloggers 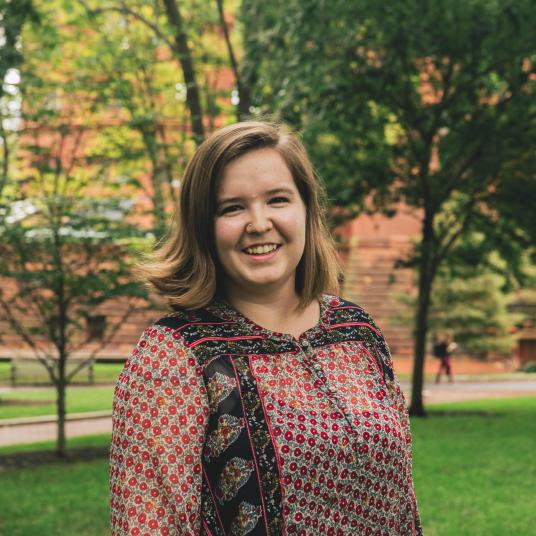