Considering that I’m writing this post in the middle of a global pandemic that seems to have no end, it feels incredibly weird to think about my time in Paris 10 months ago. But first I’ll rewind a bit and tell you how I ended up there.

Penn Global partners with the four undergraduate schools every semester to offer amazing courses called Penn Global Seminars. For the majority of the semester, they function as a regular seminar course. The class has under 25 students and meets biweekly for an hour and a half.

The seminar can be on any topic, with some examples being Health and the Healthcare System in Chile (Nursing), Security and Anxiety at International Borders: Turkey and the USA in a Global Perspective (College), Operations Strategy Practicum (Wharton), and SEAS China Immersion (Engineering). These are just a small sampling of the options, with more available to browse here. After the semester is over (or if it’s in the spring, it could be mid-way through the semester during Spring Break), you get to travel with your classmates to the place you studied about! The entire trip costs $950, which is a really great deal considering that you get 1-2 meals covered every day, a roundtrip flight, and a stay at a hotel (and ours was four stars!). For anyone who falls under the highly-aided category, the trip is free.

During the spring of my freshman year, I met the woman who would soon become my favorite professor at Penn, Mélanie Péron. We immediately clicked and talked about everything and anything, from my academic interests and personal background to the Philadelphia public school system. She encouraged me to apply to the Global Seminar she’d be offering during the Fall 2019 semester, called Paris under the German Occupation and Its Places in [Non-] Memory. After a short application and some essays about why I wanted to take the class, I was accepted and eagerly awaited the fall.

Before I knew it, my sophomore year had started and the much awaited-class had begun. Throughout the semester, we studied the difficult history of World War II in the context of France, as well as diving deep into French involvement in the Holocaust. Once we had a strong historical foundation, we started reading and watching personal testimonies from French Holocaust survivors. As we read and studied, we were all tasked with maintaining an interactive digital map that logged the key locations each survivor mentioned in their testimonies on a map of Paris. Our companion project was to plan out which places we would film on a 360º degree camera when we got to Paris. It was meticulous work, yet incredibly rewarding. We knew we were preparing for the trip of a lifetime. 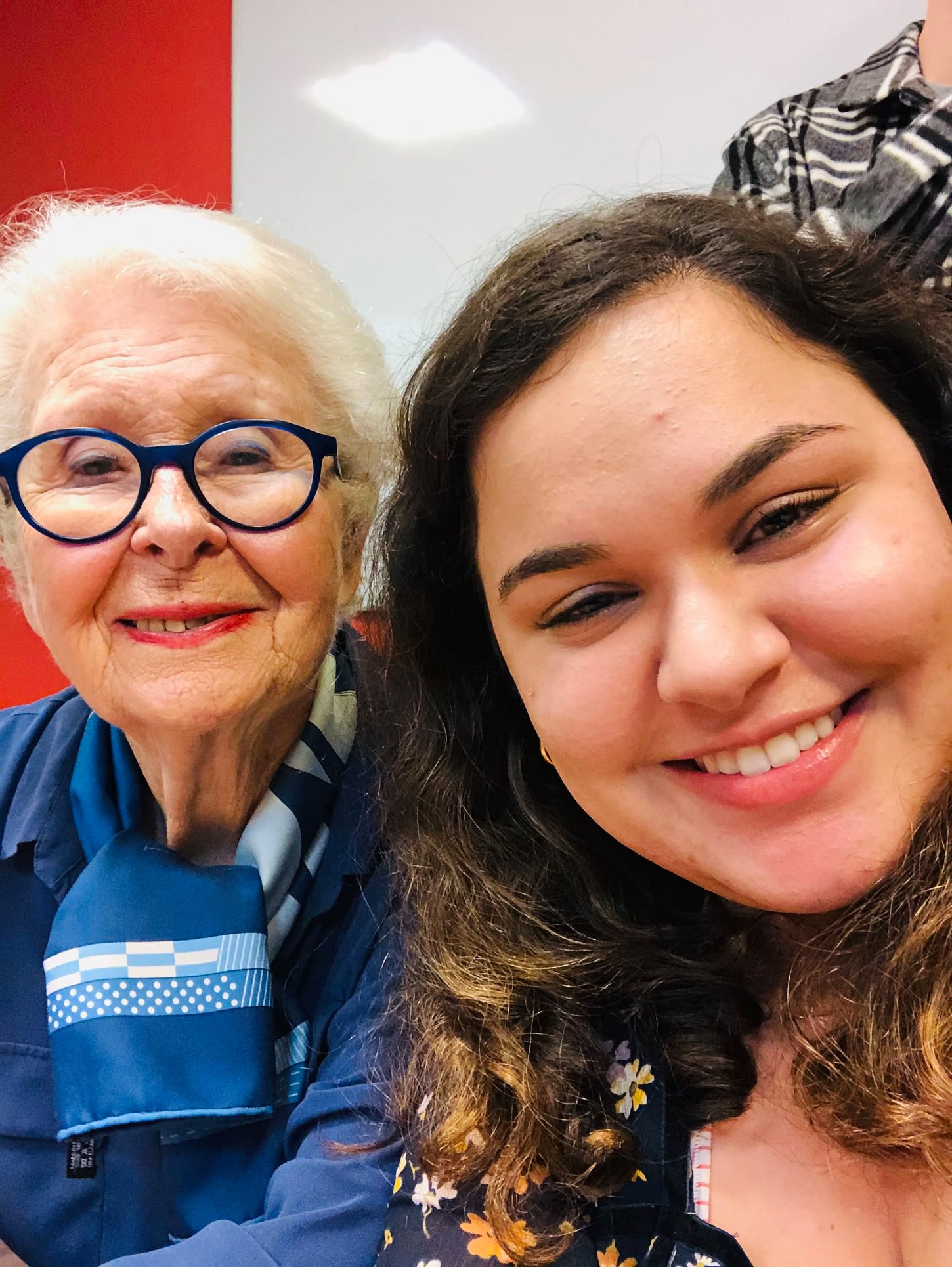 While I don’t think I will ever be able to articulate how impactful of an experience my time in Paris was, I’ll give it a shot. It was the third time I visited Paris and I knew it was with a very specific mission: not to shop, or take in every single tourist attraction, but to view Paris through the lens of its German occupation during WWII as well as a place where the Holocaust itself happened. We were also there to meet the survivors whose stories we had studied. Their names are Arlette Testyler, Francine Christophe, Rachel Jedinak, and Marcel Cohen.

These strong, beautiful, and kind individuals welcomed us into their lives, their families, and in one case, their homes. They revealed intimate details about what life was like during and after the war. They let us into their minds and hearts. They embraced us both physically and emotionally. This not only was a life-changing experience emotionally, but it also gave a whole new meaning to the events we studied. There was something so powerful and profound about being in the city they described, listening to them in person discuss their experiences, and showing them how we will pass on their stories and legacies to the next generation. 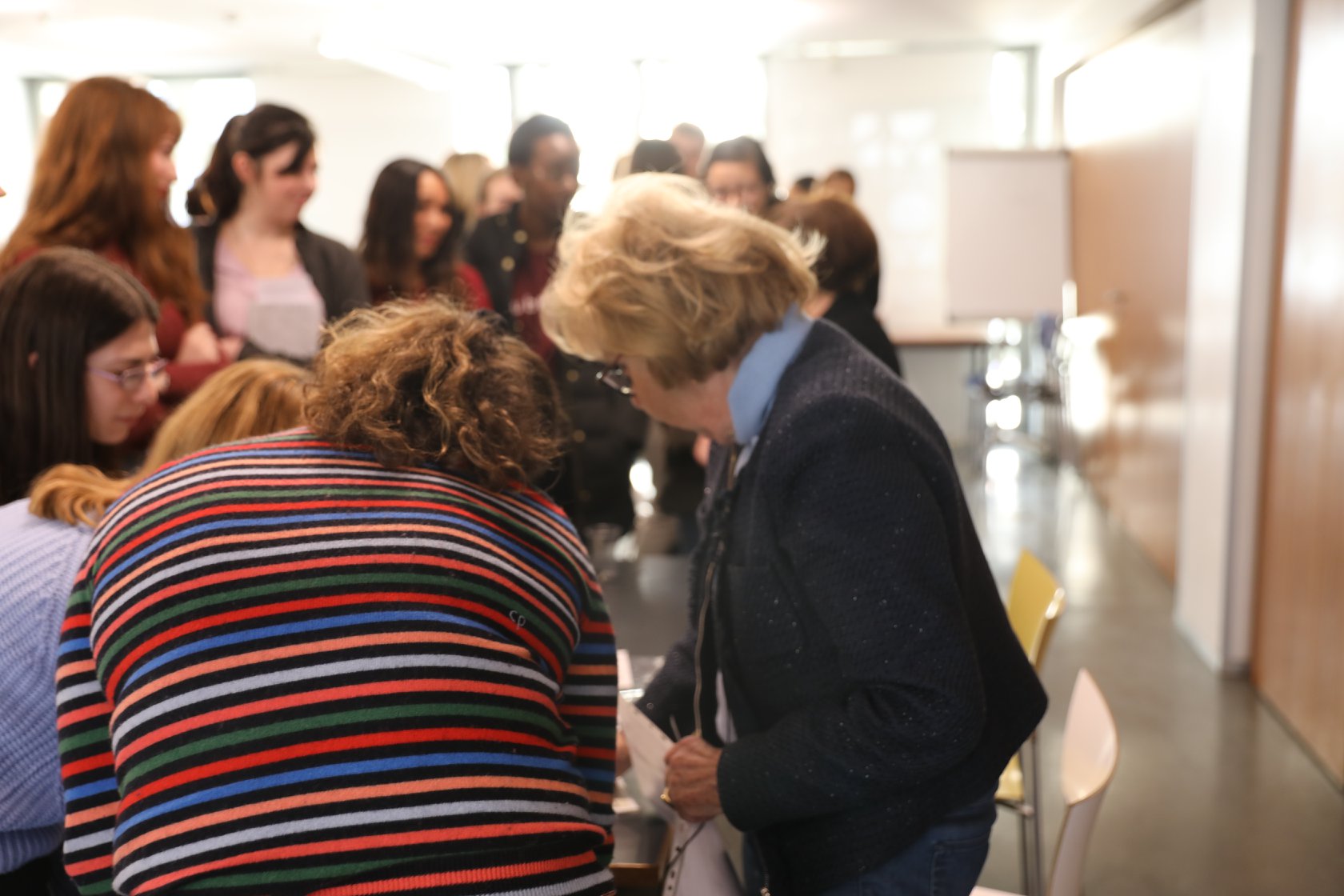 To counter the long and sometimes mentally and physically straining days of learning, walking, and mastering the Parisian metro in the middle of a national strike (email me if you want to know more, that story alone is it’s own blog post!), we unwinded with dinner as a group. We feasted on boeuf bourguignon, escargots, and cheese plates, reveled in frigid Parisian nights, and got very close as a group.

To sum it up in the words of Francine Christophe when asked what to take away from her story, “la vie est belle.” One of the many things I learned after this trip is that life really is beautiful with all of its twists and turns, even after tragedy and trauma. The little inconveniences and annoyances that clutter my mind in college pale in comparison to the things these survivors have experienced. If they can think of life like this after what they’ve lived through, then I think we all should.

Hey there! I’m Karin and I’m a student in the College of Arts and Sciences. At the moment I’m undeclared, but I’m planning on studying International Relations and French and Francophone Studies, with a minor in Legal Studies & History. On-campus, I write for 34th Street Magazine, the premier arts and culture magazine on campus, I present with the College Cognoscenti, sit on the boards of the Admissions Dean’s Advisory Board and Penn Israel Alliance, and I work at Penn Hillel. Off-campus, my favorite thing to do is explore new parts of Philadelphia, and even as a born and bred Philadelphian, I still find myself discovering new parts of the city, often through food!

View all posts by Karin Meet The Penn Admissions Bloggers