I’ve known I wanted to study architecture since I was about 10 years old. This didn’t make declaring my major any easier, though. In fact, in some ways it made it harder. What if I was just in love with the idea of being an architect? Was I prepared to put in all those hours? Did I really want to be studying for the next 8 years? I didn’t know. I still don’t. But somehow I mustered up the courage to commit, and here I am, 5 semesters later, 3/4 art history courses down, and 4/6 studios complete.

Instead of the typical one or two hour-long classes or lectures, the Undergraduate Architecture Program is divided into six consecutive studios that take place for about five hours twice a week. Ten whole hours of class a week… for one class. Large workspaces and small cupboards are allocated to each student for the duration of the semester, along with 24/7 access to the building. They really set you up for those all-nighters…

Each studio is different in its prompt, demands, software skills, and instructor. The chain begins in Freshman year, with a project that focuses on existing buildings on campus, and asks you to design a study space within them. Starting with hand drawing and measuring and progressing to digital drawings using AutoCAD, you learn how to visualize and express your ideas in a more digestible format.

The second studio analyses animals and plants, and asks you to develop an algorithm to create a prototype. Later, this prototype is brought into an existing site, where it is molded and adapted to its surroundings. I personally studied the petals of the corpse flower, and - using Rhinoceros 3D modeling software - designed a bench that latched onto Levine Hall then blossomed back over and diverted water into the fountain below. Some created bridges and chairs from dragon-fly wings and scorpion tails, others did study bubbles from diatoms.

The following semester we studied the movement of our own bodies: dancing, leaping, rolling, crunching, stretching. We used our analysis and studies to develop another prototype and this time design stairs that came down from the Walnut St Bridge into a pavilion on the river trail. I chose the flossing dance and created a nest of hoops and arcs to climb down.

Naturally, as the levels go up, so do the demands of the projects (and the workload…), and this semester alone we have completed surface studies, the design of a farmers market, and are nearing the end of a greenhouse design.

The program is very hands-on, and in addition to having twenty minutes of one-on-one feedback from our instructors during each studio, at the midpoint and completion of these projects, we present our work during reviews to gain feedback from other faculty and invited guests. Guest critics vary for each class but are often impressive (occasionally intimidating) professionals who have either worked under acclaimed architects and firms, or themselves are acclaimed architects and designers. Our most recent critique included two architects who had worked under and for  I. M. Pei and Venturi Scott Brown. Both of whom we spent a good amount of time studying in our Art History class last year.

This brings me to mention that though we spend our lives in the studio, part of the program is in the Art History department, which means we get to go on walking tours, museum visits, and spend time in the Architectural Archives- home to the Louis Kahn collection. A welcome, and mostly exciting break from the third floor of Addams Hall!

The program is a very difficult one and it requires extreme dedication and enormous amounts of time. We started in freshman year with forty students and now we’re down to ten. They are the same nine people I see every Tuesday and Thursday for class from 1pm until 6pm and on the weekends for hours at a time. They’re the same ones who occupy the room through the night during hard weeks, and who willingly give of their time to discuss my ideas and projects, and let me weigh in on theirs. We’ve watched each other struggle with software, lose sleep, and break down, and we’ve also celebrated each other after successful reviews, breakthroughs, and small victories.

I won’t say I don’t question my decisions when my software crashes, my model falls off the table or I just simply cannot… But like many things, the load is much lighter when it is shared-- and there is no shortage of community to share it with within the program.

Hi! I’m Alice, a student in the College of Arts and Sciences majoring in Architecture and minoring in French and Landscape Studies. I’m a member of the Penn Club Waterpolo team, the French Society, CU, SASA, SAIP, Penn Sustainability Consulting, Penn World Scholars and Epsilon Eta, the pre-professional environmental fraternity. When not in the studio, swimming pool or procrastinating on the Schulkyll River Bank, you will find me sampling every chai latte and hot chocolate that Philadelphia has to offer, and hanging out with my friends, of course.

View all posts by Alice Meet The Penn Admissions Bloggers 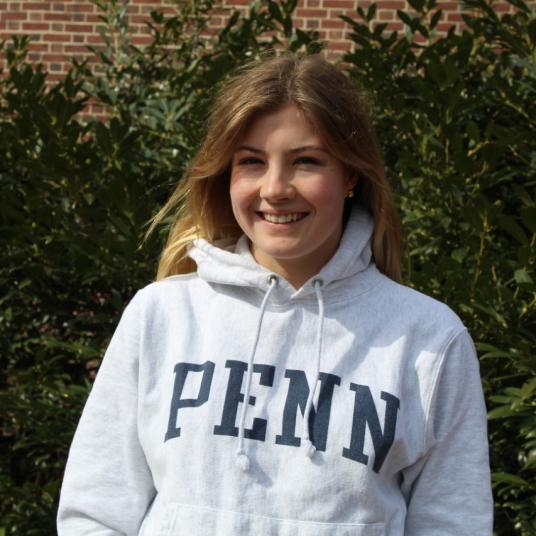